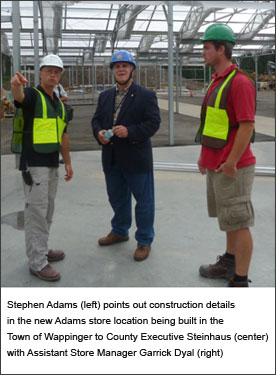 The new Adams store, the company’s fourth location in the Hudson Valley, will be approximately 70,000 square feet and is expected to open on or about November 1st in time for the holiday season.     According to Stephen Adams, the new location is similar in size to current Adams store locations in Poughkeepsie and Newburgh.     The store is expected to employ approximately 200 people in a mix of full and part-time positions.

“This new Adams store will certainly be a ‘destination’ location,” said County Executive Steinhaus.   “The Adams’ family has built a strong, positive reputation in our community and it is terrific to see them expand and grow into the southern Dutchess area.”

Customers can expect to see all of the same departments as found in current Adams store locations including produce, cheese, bakery, deli, meat, seafood on the grocery end, in addition to the garden center and nursery.    The produce department continues to be the main focus and customers can expect to see lots of choices from local farms.    “The familiar departments that our customers know and love will all be here, with a little added “flair”,” according to Stephen Adams.    For example, the meat department will feature a large butcher block table in customer view for shoppers to order custom meat cuts.

The new Wappinger location incorporates feedback and input from store and department managers from each of Adams existing locations.    Utilizing best practices and lessons learned from the other sites, the new Wappinger location is expected to have an improved customer flow as well as a larger prepared food section than found in other locations.     Prepared foods is still a relatively new category for Adams, and the new store will capitalize on the category’s growing popularity with both hot and cold choices featuring many local ingredients.     A seating area will be available for customers to stop and enjoy a bite. 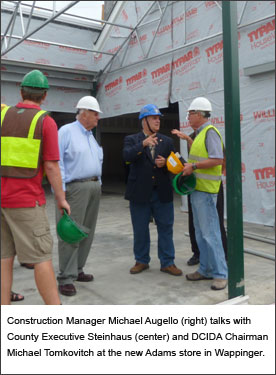 DCIDA Chairman Michael Tomkovitch was impressed by the activity on store’s construction site.   “It is great to see so many people here working.    This project has created numerous construction jobs, and when the store opens there will be hundreds of permanent jobs created.    That is exactly what we envision when we support projects through the DCIDA.”   To construct this store, Adams utilized financing assistance tools offered by the Dutchess County Industrial Development Agency.

When the new Adams store opens, customers will be certain to recognize many faces in the new Wappinger location, with an estimated 40% of the store’s staff to come from existing stores.   “Our employees are one of our biggest attractions,” said Stephen Adams.   Barbara Johnson will serve as Store Manager, transferring from the Newburgh location.   Garrett Dyal will serve as Assistant Manager, transferring from the Kingston location.   “The company is great about promoting from within,” said Mr. Dyal.   “This new location will create new job opportunities not only in Wappinger, but in our other locations as well as current employees transfer to this new store.”

County Executive Steinhaus said, “In Dutchess, we are driven to help create economic development, new payroll and jobs.    We are excited about the number of jobs this project is bringing to the area.   That is how you build community and economic infrastructure – with great projects like a new Adams store.   We are pleased we could support this project by partnering Adams with our county IDA to get the project moving and with our DCEDC to help promote and market the store once it is opened.”

Go to top of page